Subject:   How to Approximate a Timer in the RTC Rules of SWMM 5

SWMM 5 does not have a explicit timer in its Real Time Control (RTC) rules but you can approximate it by using a Control Curve as in the attached example model.  The Control Curve will modify the setting of the Weir by the Inflow to the Storage node.  You can have normal weir flow settings based on the invert elevation of the weir and the Surface node water surface elevation but in addition you can control the weir setting by:

For example, you can have the Weir Setting controlled the Node Depth,  Link Inflow and Node Inflow  simultaneously approximately with the depth and the inflow parameters closing the weir by proxy instead of by time since the closing. 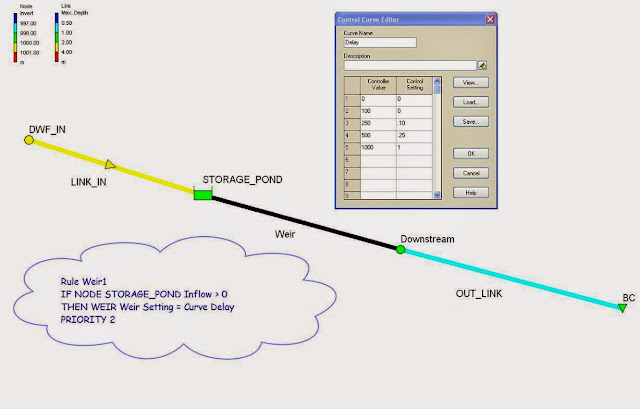 Email ThisBlogThis!Share to TwitterShare to FacebookShare to Pinterest
Labels: How to Approximate a Timer in the RTC Rules of SWMM 5, RTC