Manhole Elevations in InfoSWMM and SWMM 5

Email ThisBlogThis!Share to TwitterShare to FacebookShare to Pinterest
Labels: Manhole Elevations in InfoSWMM and SWMM 5

Subject:  How to Import the SWMM 5 Report File as a Layer in infoSWMM
The idea of this blog of note is to show how one may extract information from the SWMM 5 or InfoSWMM RPT file and import the Excel  File as a feature in InfoSWMM.  This blog has an example Excel file to illustrate the linkage. The steps are:
Step 1:  Copy the whole row  from Conduit Summary from the InfoSWMM Browser
Step 2:  Add the two columns length and  slope from the Link Summary Table and the InfoSWMM Browser
Step 3:  You need a few calculations based on the table values from SWMM 5 to estimate the CFL  time steps in the .
Step 4:   Add the Excel Spreadsheet as a layer in InfoSWMM – the Named Range should be added to insure valid numbers and not Nulls after the join
Step 5:  You can now plot the CFL Time Step for the Links using the Layer Properties command in Arc Map
Step 1:  Copy the whole row  from Conduit Summary

Step 2:  Add the two columns length and  slope from the Link Summary Table

Step 4:  Add the Excel Spreadsheet as a layer in InfoSWMM – the Named Range should be added 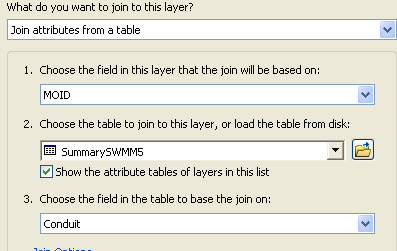 Step 5:  You can now plot the CFL Time Step for the Links using the Layer Properties command in Arc Map 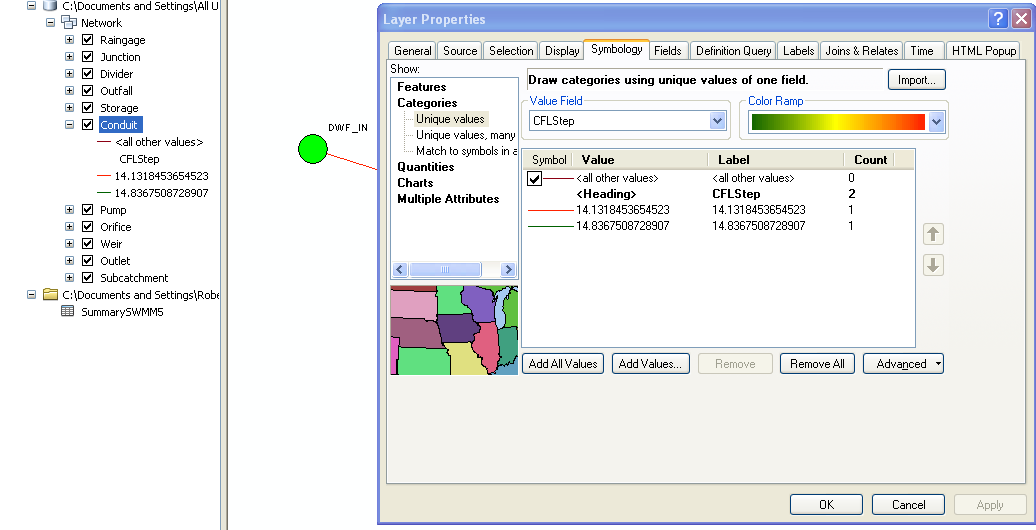 Email ThisBlogThis!Share to TwitterShare to FacebookShare to Pinterest
Labels: How to Import the SWMM 5 Report File as a Layer in infoSWMM

To My Visitors - Visitor Stats for SWMM5.NET

If you ever wondered how many people visit SWMM5.NET it is currently 1500 sessions, 1200 users and 2500 pageviews per month according to the ever changing Google Analytics.  Thanks to one and all for visiting!

Email ThisBlogThis!Share to TwitterShare to FacebookShare to Pinterest
Labels: #SWMM5, General, To My Visitors - Visitor Stats for SWMM5.NET

2008/2014 Robert E. Dickinson, one of the world’s leading experts in wastewater and urban drainage modeling, has joined Innovyze as Product Sector Leader. Dickinson, who comes to the company from CDM now CDMSmith, will be charged with maintaining, enhancing and supporting Innovyze's flagship SWMM5-based product line (InfoSWMM and H2OMAP SWMM as well as the GIS based InfoSewer and H2OMap Sewer), which are some of the industry’s leading wastewater and urban drainage systems design and modeling software. He will also be responsible for coordinating vital collaborative research and technology transfer with key universities and government organizations as well as developing business strategies that advance Innovye’s overall growth objectives in wastewater and stormwater systems management and heighten its initiatives in both U.S. and international markets.

Mr. Dickinson brings over thirty-five years of experience in software development and management of wastewater and stormwater planning and design projects to Innovyze. A principal developer of the industry-standard and FEMA-certified SWMM5 software, he has a distinguished background in computational hydraulics and high level simulation programming. He holds an M.E. degree in Environmental Engineering from the University of Florida, Gainsville.

“We are thrilled to bring Robert’s formidable talents and expertise to our company,” said Innovyze's President and COO Paul Boulos. “As one of the world’s leading experts in hydraulic and hydrologic modeling, he has made significant contributions to the field of water resources engineering. His unique combination of proven project engineering expertise, management skills and high-level technical capabilities is coveted in our industry.
“A number of factors make Robert the ideal leader to help Innovyze advance the state-of-the-art in dynamic sewer network modeling and spearhead the continued development of our SWMM5-based products family. They include his impressive record of leadership, impeccable reputation, key role in the USEPA Storm Water Management Model (SWMM5) redevelopment program, strong expertise in both numerical methods and hydrology/hydraulics, and in-depth knowledge of the wastewater industry.

“While he will be based in Tampa, Florida, Robert will work closely with our product development team and our clients as we step up our efforts to help communities around the world manage urban runoff and wet weather water quality problems in combined, sanitary and storm sewers and protect the ecological health of our waterways.”

“I am truly excited to be joining Innovyze,” said Dickinson. “For the past five years, I have followed the company’s rapid growth and development of an impressive product portfolio. I have always admired Innovyze’s unparalleled technical expertise and its steadfast commitment to research, innovation, product quality and customer care. I believe a breakthrough approach to systems modeling is a critical key to helping communities better manage and operate their buried hydraulic infrastructures and protect the environment. I look forward to playing a pivotal role in advancing Innovyze’s comprehensive urban drainage design and modeling product line and maintaining its leadership in the global wastewater industry.”

2014 - That was fun - an update of an announcement from the past.  The original is on our website. I changed my name from Bob to Robert, the company name from MWHSoft to Innovyze and list my my actual job or jobs I have been doing at @Innovyze from 2008.  I left the title alone - sometimes it is best to have a goal in life and trying to achieve the title of the announcement is something I would like to approach in my remaining Innovyze years.  I probably will not reach it but I appreciate the mastery of the Paul Boulos announcements - he writes the most creative and wonderful press releases. You should subscribe to them from www.innovyze.com if you want to read about the future of water, sewer and stormwater.  A final mention of Alight Tsai who manages http://www.innovyze.com/ and is always helpful with great images for our software and help files.  I would be remiss if I did not mention our great R/D product development teams in Monrovia and Wallingford. I am proud to be a small part of the Monrovia team.  Other history mentions about SWMM3/4/5 in my past can be found here http://www.swmm5.net/2012/05/my-history-with-various-versions-of.html

Another update for May 2015 - we are making great strides in social media led by our Director of Marketing Rajan Ray who can be found at @InnovyzeRaj and in general at @Innovyze. You can see all of our tweets by searching for Innovyze on Twitter

My contact info - in case you need to call me, I prefer email however.

How to Model Water Quality Time Series in SWMM5

You can model water quality as a SWMM 5 inflow time series using the following steps:
1. Model Water Quality (TSS  for Example)
2. Add the needed inflow Time Series at a Node
3. Include both a Flow
4. and a TSS Time Series
5. The TSS time Series is Concentration over time
The file at the bottom is an example of the TSS time series