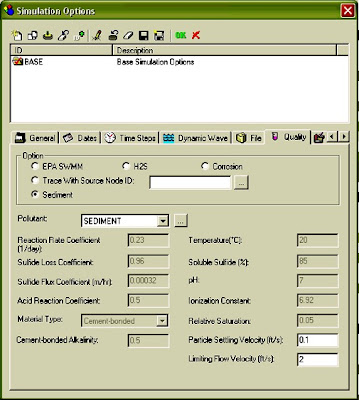 H2OMAP SWMM and InfoSWMM Sediment Transport Modeling
Sanitary and combined sewer systems can carry substantial loads of suspended solids (waste solids) which can accumulate and cause blockages thereby impairing the hydraulic capacity of the sewer pipes (by restricting their flow area and increasing the bed friction resistance). H2OMAP SWMM and InfoSWMM can simulate the transport and gravitational settling of (total suspended solids including grit) over time throughout the sewer collection system under varying hydraulic conditions. As long as flow velocity exceeds the critical/terminal velocity, H2OMAP SWMM and InfoSWMM assumes that the sewage flow has the capacity to transport all incoming . Deposited  particles are also assumed to be scoured and transported downstream when velocity of the sewage flow exceeds the terminal velocity. Settling starts when flow velocity falls below the critical velocity. In the model, transport of thet particles is governed by advection implying that the particles are transported at local flow velocity.
The sediment transport modeling using H2OMAP SWMM and InfoSWMM  requires only few inputs, namely limiting flow velocity, particle settling velocity, and source node(s) and initial concentrations (in mg/l) at the source nodes.
In order to specify the first two inputs (i.e., limiting flow velocity and particle settling velocity), the user should first select from the quality tab which in turn activates the editing tabs for particle settling velocity and limiting flow velocity. Specification of source node(s) and its/their initial concentration is similar to the method described above in relation to pollutant transport. The default values used by the model for limiting flow velocity and particle settling velocity are 2 ft/s and 0.1 ft/s, respectively.  User specified values over rid these default figures .
H2OMAP SWMM and InfoSWMM  deposition (in kg)  in pipes and  concentration (in mg/l) at manholes,  wet wells, and outlets are the outputs reported following successful simulation of  transport for a collection system.
at September 20, 2008

I found this site using [url=http://google.com]google.com[/url] And i want to thank you for your work. You have done really very good site. Great work, great site! Thank you!