1. The following fixes and updates were made to the LID module of the code (lid.c):

a. The Drain Delay time for a Rain Barrel LID is now correctly converted internally from hours to seconds.

c. Storage layers are now optional for Bio-Retention Cells and Permeable Pavement LIDs by allowing the layer height to be zero. One should still enter a non-zero conductivity for the layer if infiltration into native soil is allowed.

d. If the top width of the overland flow surface for an LID is zero then any excess water above the surface storage depth simply spills out instantaneously.

e. The calculation of infiltration in a Vegetative Swale was corrected so that a swale with vertical sides will produce the same results as a fully pervious subcatchment with the same dimensions, roughness, and slope.

f. The water initially stored in all LID units is now reported in the Status Report's Runoff Continuity table.

3. A new error message (318) is now generated if a user-prepared rainfall file has its dates out of sequence.

4. Evaporation during wet time periods was including rainfall and run-on as moisture available for evaporation when it should only be the current ponded depth. See subcatch.c.

5. Curve Number infiltration was modified to use only direct precipitation, not including runon or internally routed flow, to compute an infiltration rate. See infil.h, infil.c, subcatch.c and lid.c.

6. A new error message (110) is now generated if the ground elevation of a subcatchment is less than the initial water table elevation of its groundwater aquifer. See gwater.c, err.h, and err.c.

7. A check was added to the tailwater term of the groundwater flow equation to insure that the term is zero when no tailwater depth exists. See gwater.c.

8. Checks were added to the solution of the governing groundwater mass balance equations to catch conditions where the lower zone depth is greater than the total depth or when the upper zone moisture content is greater than the porosity. See gwater.c.

10. The critical or normal depth adjustment made for a conduit is no longer allowed to set the depth to zero -- some small depth level is always maintained. See dynwave.c.

11. The Pump Summary Report was expanded to include number of start-ups, minimum flow, and time off both the low and high ends of the pump curve. See objects.h, link.c, stats.c, and statsrpt.c.

12. When the setting of an orifice or weir was changed to 0 (to completely block flow) the flow depth in the element wasn't being set to 0. This was only a reporting error and had no effect on the flow routing calculations. See link.c.

13. The Node Surcharge Summary in the Status Report did not report a ponded node as being surcharged. This was only a reporting error and had no effect on the flow routing calculations. See stats.c. 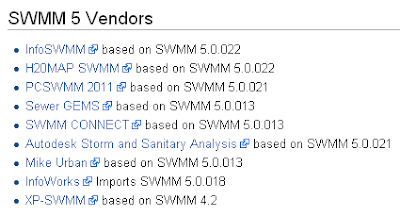 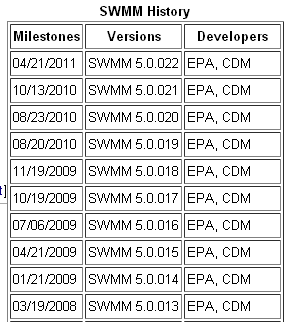 Email ThisBlogThis!Share to TwitterShare to FacebookShare to Pinterest
Labels: 10) and H20MAP SWMM v10 Updated for the new SWMM 5.0.022 Engine, InfoSWMM 11 (for ArcGIS 9

The EPA Storm Water Management Model (SWMM) is a computer software that simulates the rainfall-runoff-routing process in urban areas. It o...