1. Initially and whenever the setting (i.e., the fraction opened) changes, flow coefficients for both orifice and weir behavior are computed as follows:

a. For side orifices:

Define Hcrit = h/2 where h is the opening height.

b. For bottom orifices:

i. For a circular orifice, compute area over length (i.e., circumference) as AL = h /4.

At step 1b, the critical head for the bottom orifice, where orifice flow turns into weir flow, is found by equating the result of the orifice equation to that of the weir equation

c. Compute the flow coefficients (where A is the area of the opening):

2. During flow routing, compute the degree of inlet submergence (f) and head (H) at the current time step:

Hcrest = elevation of bottom of opening,

Hcrown = elevation of top of opening,

Hmidpt = elevation of midpoint of opening

b. For side orifices:

3. Compute the flow through the orifice (Q):

Weir behaves as a transverse weir under reverse flow

And under normal flow

Thanks Mr. Dickson. I am doing a side weir design using equation of the book Hydraulic design of side weirs by Richard May . Mr. May used the exponent of 3/2. Then I modeled the side weir in SWMM the spill flow values that I got was not the same as I computed.When I check the equations results that SWMM use the head exponent of 5/3. Then I checked couple of books including Open Channel Hydraulics from Chow, and other books from AKAN, Sturm, French etc The result was that all them use the exponent 3/2 in the side weir equation.

How EPA got 5/3 in the head exponent?

Hello Victor,
We might have a difference of terms for weirs compared to Chow and French. SWMM 5 does use 3/2 or 1.5 for the exponent for transverse and trapezoidal weirs. It uses 5/3 for what SWMM5 calls side flow - which are really overflows in a sewer, if that that helps.

Looking at my references there seem to be an exponent of 5/3 with L in the equation and 3/2 for the flow per unit length.

This side flows in swmm are only for sewers? The design consist in a distribution of water flow in an open channel using side weirs . I prepared calculations for distribution but when I modeled in swmm, the distribution is not the same.

Can you recommend another way to do this more simple? This problem with swmm is what stop to finish my tesis. :(

This is what I am doing in swmm:

1) I tried to run the model with kinematic wave but I have problems with the storages nodes. The problem was: the side flow- weir in this routing method, have to be connected to the storage nodes. The spill flow values were altered depending of the storage depth vs area.

2) Then, I switched to Dynamic wave. Now the side flow-weir are connected to a junction in the main channel (upstream of weir) and to an outfall at the downstream side. I entered the discharge coefficient which I calculated by the equation from May`s book. When I run SWMM, I have not found how to obtain the same values that I calculated.

Thanks for any help. 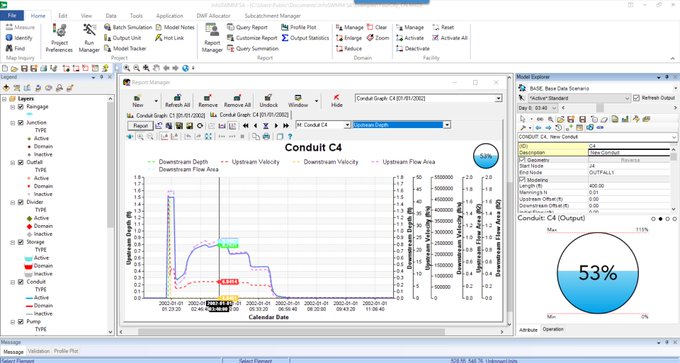