The Link Time Step in SWMM 5, InfoSWMM and H2OMap SWMM

Introduction:  This set of blogs uses the 1000 year rainfall/runoff/hydraulics model that you can download at http://swmm2000.com/forum/topics/1000-year-simulation-with-rainfall-in-swmm-5 to show the inner workings of SWMM 5 and by extension InfoSWMM and H2oMap SWMM using a QA/QC version of SWMM 5 with extended graphics.   I always hope that seeing the inner workings of a SWMM 5 feature helps to understand the code, sensitivity and importance of a parameter.   It also helps show sometimes when a parameter is not important.

IO9- What really causes that amazing "after the rain" smell?

After a rainstorm, especially a rain storm that breaks a long dry spell, the world smells different. What causes that strange, clean, earthy smell? A few things that aren't so clean.
One of the benefits of living in California is the extraordinary smell you get after the first rain of the fall. Generally it's in October or November, in a climate where warm summer rainstorms are unheard of and nothing has seen moisture in half a year. Right after the rain there's an intense smell that you have to huff while you can. It's incredibly strong. But we're not the only place that gets such a smell. People everywhere notice it, and scientists have a few theories as to what causes it.
Some of the smell, especially the parts that people identify as "clean," probably come from ozone. Oxygen atoms usually travels in pairs. Ozone consists of three oxygen atoms linked together. It's naturally created in the upper atmosphere, where the energy from ultraviolet light splits oxygen pairs in two. Each of the newly-single oxygen atoms is then taken up by oxygen pairs to form an ozone threesome. The same process can happen around waterfalls and after lightning strikes.
Ozone is sometimes used to kill off odors, especially smoky and moldy odors. The clean scent after a rainfall is partially caused by ozone cleaning away some of the scents we take for granted. Ozone also has a scent all its own. Some say it's like geraniums, but others compare it to a light bleach scent. Few sniff it for more than a moment because it does terrible damage to the lungs, splitting open cells and causing them to leak enzymes. A little ozone after the rain, however, does little damage for all the pleasure it brings.
The other main scent of a rainstorm is a sort of rich earthy smell, like freshly turned-over dirt. Actually, it's exactly like freshly turned-over dirt.
In pretty much any soil on Earth you'll find actinomycetes. These are bacteria that tend to grow in rich, wet dirt. They're beneficial both to the dirt and to us. Scientists have isolated antibiotics from dirt, and found that they're produced by these actinomycetes. When the soil dries out, the bacteria put out spores that can survive in the dry dirt. And then when it rains, the rain dampens the soil and kicks up the spores, so the scent is the of the bacteria in the air and dirt, going to work again.
Image: Leon Brooks
[Via NPR, The Weather Guys, NOAA]
at August 24, 2013 No comments:

Email ThisBlogThis!Share to TwitterShare to FacebookShare to Pinterest
Labels: IO9- What really causes that amazing "after the rain" smell?

What Node and Link Invert Elevations Does SWMM 5 Use?

Note:  What Node and  Link Invert Elevations Does SWMM 5 Use?

The use of Offset Depth or Offset Elevation for the Link Offsets is based on the user choice at the bottom of the SWMM 5 GUI Map. 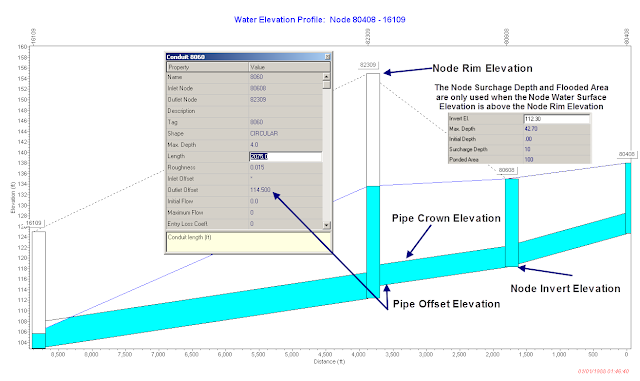 
If these problems are present in the tables to be joined, ArcMap can display null values in attribute tables or report misleading selection or record counts. Validate Join analysis checks for invalid characters when analyzing coverage data but excludes these character symbols: the number sign (#), the dollar sign ($), and the hyphen (-). It also excludes the period (.) when checking for invalid characters for ArcSDE software-connected data. However, it will report the presence of these characters as well as the number of matching records for the join.
at August 21, 2013 No comments:

Vacuum sewerage systems consist of a vacuum station, where the vacuum is generated, the vacuum pipeline system, collection chambers with collection tanks and interface valve units. In contrast to conventional gravity sewerage systems with intermediate pumping stations, the permanent pressure within the vacuum system is maintained below atmospheric pressure. Moreover, vacuum technology reduces water consumption considerably, enabling flexible installations regardless of topography and water availability. In addition, it allows for the use of alternative wastewater handling (blackwater and greywater separation). Overview of a vacuum sewer system. Source: ROEDIGER (2007)
Vacuum sewerage systems use a central vacuum source to convey sewage from individual households to a central collection station (UNEP 2002). It is a mechanised system ofwastewater transport. Unlike gravity flow (e.g.conventional sewers,separate sewers or simplified sewers), vacuum sewers use differential air pressure (negative pressure) to move the sewage. A central source of power to operate vacuum pumps is required to maintain vacuum (negative pressure) on the collection system. The system requires a normally closed vacuum/gravity interface valve at each entry point to seal the lines so that vacuum can be maintained. These valves, located in valve pits, open when a predetermined amount of sewage accumulates in collecting sumps. The resulting differential pressure between atmosphere and vacuum becomes the driving force that propels the sewage towards the vacuum station (PDH ENGINEER 2007).

Steps of wastewater transportation in a vacuum sewer system. Source: PDH ENGINEER (2007)
A traditional gravity line carries wastewater down to the collection chamber (it is recommended to combine it with vacuum- or low-flush toilets). As soon as the level reaches a defined height, thevacuum interface valve opens and the negative pressure sucks the wastewater into thevacuum sewer main. At the end of the pipe system, there is a collection tank. When the tank fills to a predetermined level, sewage pumps transfer the contents to a treatment plant via aconventional or separate sewer system. It is important to understand that the collection system is hold on permanent level of vacuum. Cross-section of a collection chamber. Source: GTZ(2005)
The wastewater from the houses is held back in collection chambers, with pneumatic regulating valves close to the houses. When a given volume of wastewater is collected in the chamber sump, a pneumatic controller is activated by hydrostatic pressure. The controller opens an interface valvefor an adjustable time period. The wastewater (10 to 50 L) and a certain amount of air (20 to 60 L) are evacuated through the open valve into the vacuum sewer line. The pressure gradient between the vacuum station and atmospheric pressure at the collection pits is responsible for the movement of sewage to the vacuum tank (GTZ 2005). In contrast to gravity sewer pipes, it is easier and cheaper to build the vacuum sewer piping. Nomanholes or sewer pumping stations are necessary, just inspection points for pressure testing. This avoids settling of sludge and no manholes are needed to be cleaned out (see also dignity orhuman powered emptying). The pipes of a vacuum sewer system have a smaller diameter (80 to 250 mm) and the trenches are narrow and shallow (1.0 to 1.2 m). That is also an advantage if there is a high groundwater table. Unexpected obstacle can easily be bypassed by a modified and more flexible pipe design. If a pipe is damaged, the risk of sewage infiltration is very low, because of the negative pressure in the sewer line. Expert design is required, but the construction and installation work can be done by local contractors and pipe suppliers. No heavy machinery is necessary and there is no danger of a collapse of deep trenches (ROEDIGER 2007). Local workers at construction of a shallow vacuum sewer system (above) and excavation of gravitysewer trenches with heavy machinery. Source: ROEDIGER (2007)

As it is a high-tech system, it is costly. But in comparison with a conventional sewer system, it is cheaper. Piping costs are lower, because the dimensions are smaller. Therefore, less material is required. Also the installation can be cheaper because piping is independent from the topography. Furthermore, no heavy machinery is necessary for excavate deep trenches, thus the work can be done by local workers, which creates employment. Finally, big amounts of flushing water can be saved which is economical and ecological reasonable. However, the constantenergy requirement for the permanent vacuum generation can increase the costs.

The risk of clogging is low and there is almost no cleaning/emptying work to do. From time to time pressure in the vacuum sewer system should be tested. The system needs instructed workers for maintenance and operation works. More complex and/or technical problems are in the responsibility of the manufacturer.

Construction of a sewer at the left side and pressure testing et the right side. Source: ROEDIGER (2007)

As long as it is maintained properly, a vacuum sewer system guarantees a high level of comfort and hygiene. There is a very low risk of contamination due to leakage. It is a closed system, thus there is almost no contact between wastewater and operators. However, a treatment system at the end of the pipe needs to be in place.

Basically, vacuum sewering is most suitable in areas where a collection is needed but other options are too costly or not feasible (Adapted from HUBA & PANZERBIETER 2006);
Where potable water is in short supply and/or people are poor, flushing velocities in gravitysewers are often difficult to attain and maintain. A vacuum system relies on the negative pressure to propel the liquid at scouring velocities and it is largely independent of the volumes of water used.