Showing posts from June, 2012
Show all

How does the Infiltration Maximum Time to Drain the Upper Soil Zone Work in SWMM 5 Green Ampt?

A Canopy of Man-Made Solar-Powered Supertrees Flourishes in Singapore

A Canopy of Man-Made Solar-Powered Supertrees Flourishes in Singapore
A national park filled with electrified, man-made trees sounds like a paradox. But Singapore’s latest landscaping project, a 250-acre site called Gardens by the Bay, mixes nature and mechanics with an "artificial forest" full of glowing trees, globally-sourced plants, heritage vegetation, and a conservatory built around a 35-meter mountain complete with the world's tallest indoor waterfall. The project is pushing the boundary of what an urban park can be. On June 29, Singapore’s National Parks Board will open a section of this project, called Bay South Garden, to the public, welcoming visitors to 18 just-installed "Supertrees," climbing to 50 meters in height. "Many countries now do tree-planting and call themselves garden cities," CEO of Gardens by the Bay, Dr. Kiat Tan explained in a 2011 speech. "To retain our edge and continue to improve our living environment, we have bee…
5 comments
Read more

What are the Equations for Weirs in SWMM 5, Part 2?

Subject:   What are the Equations for Weirs in SWMM 5, Part 2?

What are the Equations for Weirs in SWMM 5, Part 2?by dickinsonreSubject:   What are the Equations for Weirs in SWMM 5, Part 2? There are four types of Weirs in SWMM 5:  Transverse, Sideflow, V Notch and Trapezoidal.   The trapezoidal weir is a combination of the Sideflow and V Notch Weir and the Sideflow acts like a Transverse Weir when the flow is reversed (Figure 1).  The Weirs can have zero, one or two end contractions (Figure 2) and the Weir Length is a function of the Weir Setting and Horizontal Weir Length.  A V Notch weir works as Trapezoidal Weir when the Weir RTC Setting is less than 1.0 Figure 1.   Weir Equations in SWMM5 Figure 2.   Valid Number of End Contractions Figure 3.  Weir Length Calculations via Blogger http://www.swmm5.net/2013/08/what-are-equations-for-we

Water Quality Treatment Removal Variables in SWMM5by dickinsonreSubject:Water Quality Treatment Removal Variables in SWMM5
The treatment variables for Water Quality in a SWMM 5 storage unit (Figure 1) can be either:  1.       A Process Variable a.       HRT or Hydraulic Residence Time b.      DT or Time Step c.       FLOW or The Current Inflow d.      DEPTH or the Mean Flow over the Time Step e.      AREA or the Mean Area over the Time Step 2.       Pollutant Concentration 3.       Pollutant Removal based on the Removal of Other Pollutants  With a Wide Range of Treatment Functions (Figure 2).
Figure 1.  SWMM 5 Treatment Variable Names in the Treatment Equation Figure 2.   Treatment Functions in SWMM 5
via Blogger http://www.swmm5.net/2013/08/water-quality-treatment-removal.html
Post a Comment
Read more

What are the Equations for Weirs in SWMM 5? 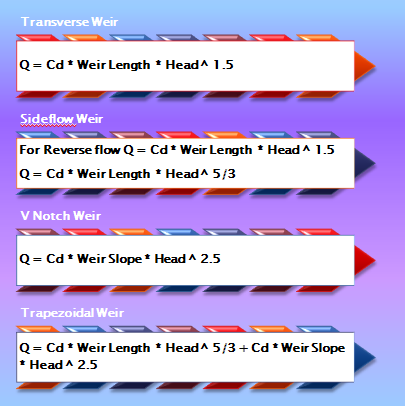 Subject:   What are the Equations for Weirs in SWMM 5?

There are four types of Weirs in SWMM 5:  Transverse, Sideflow, V Notch and Trapezoidal.   The trapezoidal weir is a combination of the Sideflow and V Notch Weir and the Sideflow acts like a Transverse Weir when the flow is reversed (Figure 1).

June 22, 2012
Toilets Save Lives Erika Christakis advocates for better sanitation. She points out that the "impact of poor sanitation — and its economic consequences — is well-known": Source, The Dish So why hasn’t this become an issue of global concern? Instead, between 1997 and 2008, the percentage of international aid that went to sanitation and water fell from 8% to 5%. Concerns over safe drinking water get much more attention, despite a recent World Bank study that found a more pronounced impact on health from building toilet infrastructure than from drinking-water improvements. Few people enjoy talking about bodily functions, and it’s hard for emerging economies to get excited about pit latrines and compost toilets when they’d rather showcase their shiny new buildings and high-speed trains. Feces and open sewers are a hard sell for donors too. There’s no pretty logo — no babbling brook or fresh water spring — for a toilet.
Post a Comment
Read more

Convolution of the RDII UH from R, T and K in SWMM 5

Subject:  Convolution of the RDII UH from R, T and K in SWMM 5

T
Duluth Minnesota Flooding of June 20, 2012by dickinsonreSubject: Duluth Minnesota Flooding of June 20, 2012
The images come from this Duluth Link.Radar Map
A series of "training" thunderstorms that all passed over the same region have dumped 4 - 5 inches of rain over a wide swath of Northern Minnesota overnight and early this morning. Nearly 8 inches of rain fell in the Denfeld area of western Duluth. This is more rain than fell in the city's previous worst flood on record, which occurred August 20, 1972. Major flooding is occurring, and only emergency travel is recommended in the city due to flooded roads. system and the saturated ground cannot take much more rain. According to wunderground's weather historian, Christopher C. Burt, the all-time 24 hour precipitation record for Duluth is 5.79" on 8/22 - 8/23 1978; 4.14" was recordedon Tuesday at the airport.


Figure 2.   The Mass loading needed to generate a concentration at a particular flow rate. 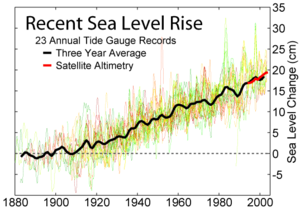 Virginia Lawmaker Says ‘Sea Level Rise’ Is A ‘Left Wing Term,’ Excises It From State Report On Coastal Flooding By Rebecca Leber posted from Climate Progress on Jun 10, 2012 at 6:59 pm

Virginia’s legislature commissioned a $50,000 study to determine the impacts of climate change on the state’s shores. To greenlight the project, theyomitted wordslike “climate change” and “sea level rise” from the study’s description itself. According to the House of Delegates sponsor of the study, these are “liberal code words,” even though they are noncontroversial in the climate science community. Instead of using climate change, sea level rise, and global warming, the study uses terms like “coastal resiliency” and “recurrent flooding.” Republican State Delegate Chris Stolle, who steered the legislation, cut “sea level rise” from the draft. Stolle has also said the “jury’s still out” on humans’ impact on global warming: State Del. Chris Stolle, R-Virginia Beach, who insisted on changing the “sea level…
Post a Comment
Read more

Mass Balance for Water Quality in SWMM 5by dickinsonreSubject:   Mass Balance for Water Quality in SWMM 5
The rainfall concentration is listed in the wet deposition row of the Runoff Quality Continuity Table, the washoff such as EMC washoff is listed in the Surface Runoff row.  If you are simulating groundwater quality then it is listed as a separate value in a row of the Quality Routing Continuity table alongside RDII quality, DWF quality and WWF quality.
via Blogger http://www.swmm5.net/2013/08/mass-balance-for-water-quality-in-swmm-5.html