Saving to previous versions of ArcGIS in InfoSWMM and InfoSewer

Saving to previous versions of ArcGIS in InfoSWMM and InfoSewer
Once you open and save an existing map document (.mxd file) using ArcGIS 10, the map can no longer be opened with earlier versions of ArcGIS because it will now reflect the new functionality added at 10. Similarly, new documents you create with 10 also cannot be opened in earlier versions of the software. However, you can use the Save A Copy command to make a copy of a map document so you can open and work with it in previous versions of ArcGIS. With ArcGIS 10, you can save to ArcGIS 9.3, 9.2, 9.0/9.1, or 8.3. ArcGIS 9.0 and 9.1 map documents are directly compatible with each other and those versions of the software.
Each new version of ArcGIS introduces functionality and properties that aren't available in previous versions. When you save a map document, layer file, or 3D document to a previous version of ArcGIS, the format of the file is changed to eliminate properties not available in the older version.
This means saving from 10 to a previous version removes from the file any functionality that depends on the newer software in ArcGIS 10. Therefore, some work may be lost if you save to 9.3, 9.2, 9.0/9.1, or 8.3 and start working with the older copy again in 10, since the 10 functionality was stripped out in the Save A Copy process. Your original ArcGIS 10 file will still have the new functionality.  Source http://help.arcgis.com/en/arcgisdesktop/10.0/help/index.html#//006600000253000000.htm

The web site has http://swmm5legacycode.ning.com/  historical SWMM 5 installs, SWMM 5 input file examples and SWMM 4 input files and engines.   The SWMM 4 engines go back to SWMM 3.5 engines from the 1980’s. 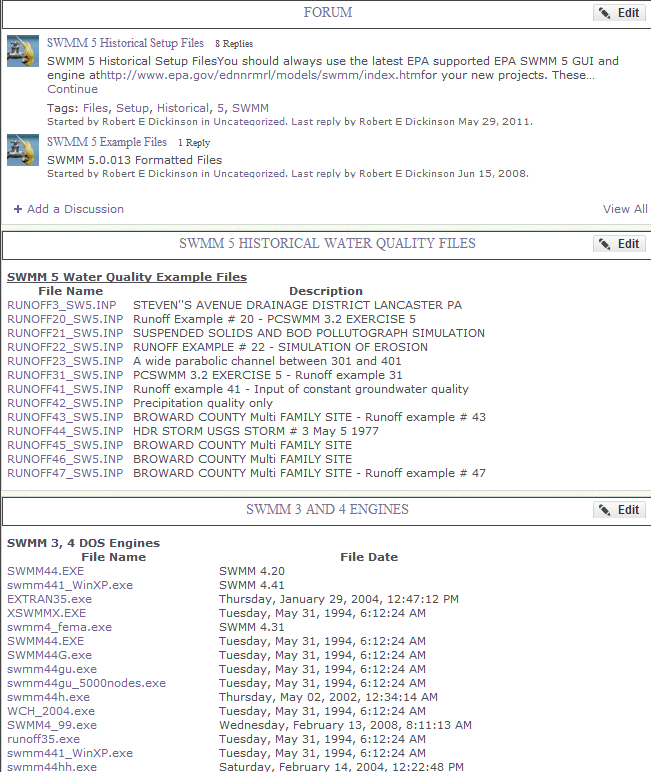 How is the St Venant Equation Solved for in the Dynamic Wave Solution of SWMM 5?

Subject:   How is the St Venant Equation Solved for in the Dynamic Wave Solution of SWMM 5?

Email ThisBlogThis!Share to TwitterShare to FacebookShare to Pinterest
Labels: Force Mains, Groundwater, How is the St Venant Equation Solved for in the Dynamic Wave Solution of SWMM 5?, St. Venant, Surcharge, SWMM 5

Email ThisBlogThis!Share to TwitterShare to FacebookShare to Pinterest
Labels: Force Main Friction Loss in InfoSWMM and the Transition from Partial to Full Flow

May 21, 2012
ScienceDaily (May 21, 2012) — A clear change in salinity has been detected in the world's oceans, signalling shifts and an acceleration in the global rainfall and evaporation cycle.
In a paper just published in the journal Science, Australian scientists from the Commonwealth Scientific and Industrial Research Organisation (CSIRO) and the Lawrence Livermore National Laboratory, California, reported changing patterns of salinity in the global ocean during the past 50 years, marking a clear fingerprint of climate change.
Lead author, Dr Paul Durack, said that by looking at observed ocean salinity changes and the relationship between salinity, rainfall and evaporation in climate models, they determined the water cycle has strengthened by four per cent from 1950-2000. This is twice the response projected by current generation global climate models.
"Salinity shifts in the ocean confirm climate and the global water cycle have changed.

"These changes suggest that arid regions have become drier and high rainfall regions have become wetter in response to observed global warming," said Dr Durack, a post-doctoral fellow at the Lawrence Livermore National Laboratory.
With a projected temperature rise of 3ºC by the end of the century, the researchers estimate a 24 per cent acceleration of the water cycle is possible.
Scientists have struggled to determine coherent estimates of water cycle changes from land-based data because surface observations of rainfall and evaporation are sparse. However, according to the team, global oceans provide a much clearer picture.
"The ocean matters to climate -- it stores 97 per cent of the world's water; receives 80 per cent of the all surface rainfall and; it has absorbed 90 per cent of the Earth's energy increase associated with past atmospheric warming," said co-author, Dr Richard Matear of CSIRO's Wealth from Oceans Flagship.

"Warming of the Earth's surface and lower atmosphere is expected to strengthen the water cycle largely driven by the ability of warmer air to hold and redistribute more moisture."
He said the intensification is an enhancement in the patterns of exchange between evaporation and rainfall and with oceans accounting for 71 percent of the global surface area the change is clearly represented in ocean surface salinity patterns.
In the study, the scientists combined 50-year observed global surface salinity changes with changes from global climate models and found "robust evidence of an intensified global water cycle at a rate of about eight per cent per degree of surface warming," Dr Durack said.
Dr Durack said the patterns are not uniform, with regional variations agreeing with the 'rich get richer' mechanism, where wet regions get wetter and dry regions drier.
He said a change in freshwater availability in response to climate change poses a more significant risk to human societies and ecosystems than warming alone.
"Changes to the global water cycle and the corresponding redistribution of rainfall will affect food availability, stability, access and utilization," Dr Durack said.
Dr Susan Wijffels, co-Chair of the global Argo project and a co-author on the study, said maintenance of the present fleet of around 3,500 profilers is critical to observing continuing changes to salinity in the upper oceans.
The work was funded through the Australian Climate Change Science Program, a joint initiative of the Department of Climate Change and Energy Efficiency, the Bureau of Meteorology and CSIRO.
Share this story on Facebook, Twitter, and Google:
Other social bookmarking and sharing tools:
Story Source:

The above story is reprinted from materials provided by CSIRO Australia.
Note: Materials may be edited for content and length. For further information, please contact the source cited above.

Example FM SWMM 5 model with and without Surcharge Depth

Subject:   Example FM SWMM 5 model with and without Surcharge Depth